It is unavoidable to get older but this passage in your life brings to you a lot of disadvantages and some little advantages as I increasingly happen to say.

Among the plus side, surely the first advantage is that I become more reflective but to be fair just a little bit, more diplomatic and more capable to handle everything that life is throwing at you due to the cumulated so called life experience. Recently, I realized to have started to use more often a phrase I always despised, the infamous “I had told it before”. I can’t stand it because every time I am using it I instantly realize that what I was saying a long time before wasn’t taken in a adequate consideration firstly and secondly, as always, what I was saying before was inevitably putting me in the position of being the perfect pain in the ass kind of guy.

Some time ago when the Enduro bike was conceived, at the beginning it was considered an excellent training tool for downhillers and an instrument for cross country cyclists to improve their technical skills. But then, the Enduro category started to take off as a new and independent discipline. As always, I was sure about that and I didn’t spare anyone in telling it but I was regarded as a visionary person.

A couple of years ago with the support of my friends Cristian Trippa and Davide Bonandrini, I thought the times were ready for the launch of a pedal assisted mountain bike race series because of the growing interest coming from the base of cycling amateurs. It was a real gamble because anyone would have bet against the success of it considering a race series organized for “unfit” cyclists a total nonsense and doomed to failure. If we take a look at the popularity of the E-Enduro race series , the phrase I had told it was perfectly placed in time and nowadays our race format is duplicated everywhere by our competitors.

As for the Enduro category ten years ago, the E-Enduro category didn’t have from the start a prototype athlete. Some came from other categories and some were just beginners in general. Yes, real beginners who choose to start their approach to mountain biking with a pedal assisted bike. But as I said since the inception of the E-Enduro, we were able to capture the interest of cyclists who are becoming the new specialists of the category, like Andrea Garibbo for example. He is the model of the new E-Enduro cyclist. I could have named other athletes but Andrea is a person I like lot, an athlete that doesn’t speak too much but works a lot. Like anyone else in the circuit, he is capable of interpreting perfectly the E-Enduro bike. You could be wrong in thinking that if you are fast on a muscular bike you will be as fast on an electric bike. Andrea is capable of managing an e-Enduro race perfectly and that makes him the fastest in combination with a good planets alignment may be. At the beginning of this season, lots of people unaware of the race past of Andrea were casting doubts on this guy coming out of nowhere but his consistency was enough to convince everybody.

When I was young, I used to ride off road motorcycles in Enduro races where the different race categories were defined by engines displacement. During those times, talented riders were subjected to the doubts of riding bikes with more displacement than the admitted allowed for their category because bikes were practically identical. Conformity checks were part of the game back then as it is now for the E-Enduro. Our race courses are studied to avoid a predominant role of the electric motor assistance but we will always stress the point of not altering in any ways possible the performances of stock e-bikes.

Returning to Andrea Garibbo, he’s the kind of guy who is always going full throttle and he gave us another proof of that last weekend in France, where only bad luck kept him away from winning abroad. Good job Andrea Garibbo, I had told it before!

[GPX TRACKS] Bergamo the fourth round of the E-Enduro<br>powered by Specialized. 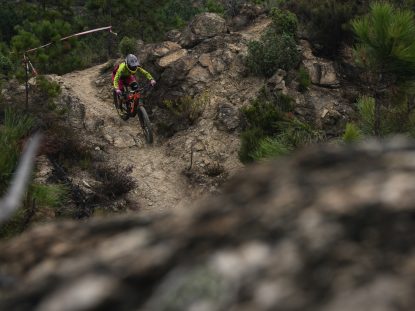