After months of long and hard preparation work, unfortunately the Loano Municipality announced that their assigned round of the 2019 e Enduro International Series cannot take place during the current racing season, due to unpredictable causes outside the will and control of the administration.

The Loano administration was one of the first supporters of the bringing to the city of the first Italian UCI international e-MTB event such as the EEIS and will candidate again for the 2020 season. Race Events is deeply sorry for the 2019 EEIS Loano cancellation and not responsible for it and while thanking the city of Loano for what has done in the past for the e MTB category, in a few days will communicate its position on the argument in a new press release.

To maintain its obligations to the sponsors and to the participants of the race series, Race Events had to quickly react and it did, replacing the Loano location with Varazze. Thus, Varazze will be the race location for the last round of the 2019 e-Enduro International Series and the first Italian location of a UCI international event solely dedicated to the e-MTB category.

Marco D’Aliesio, chairman of the Vaze Free Time the organization in charge of all the outdoor activities of the city of Varazze commented:

“Becoming the city to host the first Italian round of the EEIS feels like being strike by a lightning in sunny day and will bring in new challenges to test our organizational skills but we are confident this change will make a difference in our touristic and territorial promotional plan we are working on since 2014. Next October 5 and 6, will be an historical date for the city of Varazze and we will be ready in time to greet the sportsmen coming from Italy and from all over the world to attend this first Italian edition of an international venue of this kind”.

“First of all, I am truly sorry for the city of Loano defection because it really deserved the EEIS UCI international event but Varazze had been always present in the sports history of Race Events since it began its operations believing in our project and becoming a reference location for the e-MTB category athletes from all over the world. As an organizational staff, we are very happy that Varazze is supporting us once again. It is going to be rad!”

“The Spotorno administration in cooperation with Race Events and Spotorno Outdoor is proud to announce that it will organize the fifth and final round of the 2019 e-Enduro race series, the most important e MTB series exclusively dedicated to e-bike. After having hosted last year one of the special stages of the Enduro World Series, the city agreed to use again competitive mountain biking to promote its beautiful territory and its MTB trail network that includes trails dedicated to MTB Enduro, be it muscular or electric. In the recent years in cooperation with Spotorno Outdoor, a local sport association, that maintains MTB trails in the area, the city supported the developing of e-MTB specific trails.
The Spotorno’ e-Enduro round will take place next October, on the 19th and 20th. The arrival /departure zone as well as the Team Area will be hosted in Piazza della Vittoria Square. The local trail builder team will prepare for the occasion a special race course on the surrounding hills, including four special stages approximately 30 kilometres long in total with a D+ of 1.400 meters”.

“What can I say! We are proud to notice that our race series continue to generate interest among potential partners suggesting new race location ready to accept new challenges. Finding substitutes for two racing dates in a matter of a few days was not easy but surely the general interest for e-biking helped us a lot. For the moment, I’d like to thank the Spotorno Municipality that I am pretty sure will do an excellent work for the upcoming final round of the current e-Enduro season” 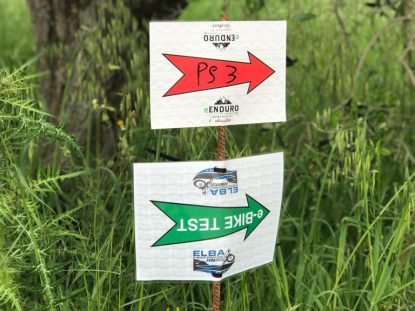