The third round of the e-Enduro powered by Specialized was a race copied and pasted from the heroic cycling of old. When the going gets tough, the e-riders get going. Under a pouring rain, it was a real fight against the adverse weather conditions on very slippery trails.

Thanks to the masterpiece job of the ASD I Gufi, the race course coped pretty well with the rain to make the race a high quality one.

Practice day
Even if under heavy rain, the weekend started with high spirits here in Pogno for the last weekend e-Enduro round. As usual with the rain coming, a wide array of problems arises like mud, scarce grip on the trails, bleared goggles and over all, falls. Nevertheless, all the e-rider never stopped to recon the special stages all Saturday long. Pogno is the location of choice for training or just to spend a riding day on its renewed flowing trails for many mountain bikers living in the North of Italy. Pogno is also the home turf of Davide Sottocornola, the former 2012 Italian MTB Enduro champions, turned e-biker last season and now taking under his protective wings the teammate Simone Martinelli (Cicobikes DSB Team) arrived 2nd in the 2018 e-Enduro overall classification. After an intense practice day, the now famous Aperi-Briefing as we call the usual pre-race briefing took place among race judges, athletes, team managers and our Chief Trail Advisor Franco Monchiero cheering everyone with music, drinks and food. The Expo Area saw the return of an historic brand of Italian cycling because Atala was again in the race series sponsors line-up joining partners of the likes of Specialized, Brose, Vittoria, Fox, Manitou, Andreani Group, Ohlins, Haibike, Ridewill, Husqvarna, Mr. Wolf and Resolvbike.

Race Day
The night was rainy and the falling water was still hammering the race course so consequently the race control unanimously agreed with the judges and the riders to cancel the special stages 2 and 4 for total impracticability.

It was a tough call but the spectacularity of the race did not diminish from the shortening. The race was a fight until the last curve and the over 10 minutes long PS #2 to be ridden twice was one of the hardest battlefield of all the series history can remember. Since the start, Davide Sottocornola (CicoBikes DSB Nonsolofango Team) and Andrea Garibbo (Haibike Italia Factory Team) were battling each other. Andrea was in first position after PS 1 but Davide after a crazy ran special stage 2 was capable to overturn the overall classification in his favour taking the win. So, the final classification is Davide Sottocornola in first position, followed by Andrea Garibbo 2nd and Simone Martinelli (CicoBikes DSB Nonsolofango Team) third

Here are the complete overall results

Here are the categories results

Andrea Sottocornola
Finally, I made it! Beating Andrea Garibbo was not easy because the kid is really fast and I wasn’t thinking to be able to make it. After PS 1 I was behind him 8 secs but in PS 2 I pushed very hard and it went well, very well. I am so glad to win again here in Pogno where I was crowned Italian MTB Enduro champion back in 2012. Now, the e-Enduro championship is reopened and I will give all I have to win it.

Alia Marcellini
It was rad! I had so much fun in this race. As usual, until you seriously race on an e-MTB on challenging race courses you cannot understand its potential and the physical effort needed. I would like to race again in this category but my calendar is full for the rest of the season. We will see it. For the next season, I will evaluate to insert the e-Enduro race series fully in my race calendar because it is so much fun even under bad weather conditions.

Overall, mud and rain combined with slippery trails were not capable to erase the smile from the rider’s faces giving them a break only on Sunday late afternoon. The final Pasta Party kindly offered by the MTB I Gufi was also a blast, with all the participants at the venue sitting on long tables inside the Pogno Sports Centre. We would like to thank all the volunteers, the sponsors and everyone else who despite the bad weather did an incredible job in making this venue possible. 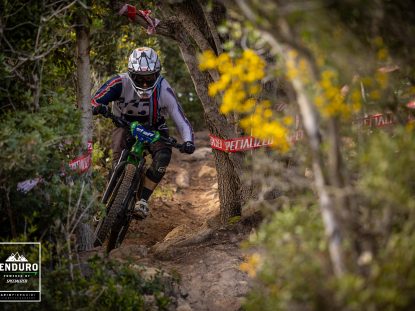