Rocchetta Belbo is a small village of less than 190 inhabitants where everybody knows each other, and coffee breaks are made at the same bar. Friendship is built not only on sharing traditional values together with food and wine but also on carrying on projects to develop the most important resource at disposal of the population: the territory. Projects like the Alta Langa Bike Park embodies that spirit and are supported by companies like the Ferrero Inox owned by Luca Ferrero, a true advocate of a sustainable economic development. As anticipated, Rocchetta Belbo was home of the first edition of the 2019 Skill Events after being the location of the last round of the 2018 E-Enduro race series. Skill Events is a non-competitive venue aimed at testing material and rider’s preparation before the upcoming start of the season. A special prepped special stage was the proving ground chosen by the organizers to test bike’s set up and riders riding confidence. MySdam, the official timekeeper, was capable to provide separate timing for climbing and descending in addition to the total time as well as whatsapping the data straight to rider’s phones. The ENDU enrolled riders had a dedicated monitor to check their special stage timing while also receiving updates via SMS of their last run. The Rocchetta Belbo Skill Events was a world premiere in the mountain bike universe and captured the interest of more than 300 participants. A lot of journos where also present to test different bikes while more than 15 companies were exhibitors in the expo area, transforming it in a small fair for e-mountain biking.

– Specialized was present and announced the renewal as the e-Enduro title sponsor until 2020. – Vittoria came with its truck to present to the media its 2020 product range. To conclude, our Franco Monchiero nailed again in finding another masterpiece format. The Skill Events will mark a change in the way Enduro e-bike are tested and probably paved a way for the future. Race Evens would like to thank all the participants, the local organizers, the volunteers and the Rocchetta Belbo’s local administration. while here you can find all the times

Skills Event! What a wonderful Sunday! 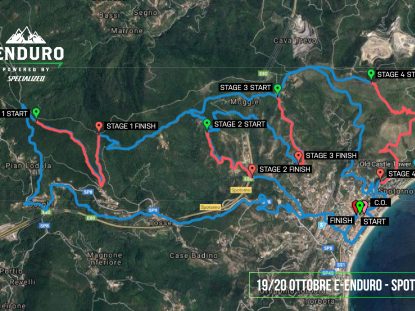