In the recent years, Race Events has been involved in the sports promotion trough the organization of national and international events. As a result and after the inception of the e-Enduro race series, a breeding of new e-MTB athletes filled the departure lists of each Race Events venue and a long list of touristic location with the goal of promoting their territory joined the series so far. Among the professionalism showed by the most of the local organizers, the Lacona ASD and the local Pro Loco were capable to demonstrate to be able to organize an extraordinary event even if it was their first national scale event. Thanks to the good weather, the Elba Island gifted the over 130 participants to the second round of the 2019 e-Enduro with an unforgettable weekend full of memories that are going to stay vivid for a long time. During the race weekend, the opener Friday saw all the athletes do the recce on all the five panoramic special stages and to testify on the landscape’s beauty, we can tell we never had so many interactions on all our social media channels. The end of the day was sanctioned with the first ever Aperi-Briefing, it was the usual pre-race briefing but this time was seasoned with bruschetta tomatoes’ bread , ice cold spritz drinks and after the race judges left, the space was filled with a lot of music to please all the riders and their parties. The end of the race pasta’s party was epic! Instead of just providing a plate of pasta to all the athletes, the ASD Lacona offered three different entrees made of fish, meat and tomatoes, barbecued meat sided with grilled vegetables, different desserts and an open bar with live music. Everyone was delighted and in awe.

The ASD Lacona Chief Executive Officer Lido Tallinucci commented after the end of the race:
“What a spectacle all these e-bike guys! It was awesome! Speaking in behalf of the PRO LOCO Lacona and of the ASD Lacona, I would like to thank firstly the e-Enduro’s Race Events for having given to us the chance to organize a round of their race series and the Capoliveri Municipality and Visit Elba.IT for having supported us since the beginning. All the others sponsors deserved to be thanked as well: Prenotazioni 24 for the great help in handling the ferries reservations, Locman Italy, Panificio Nocentini, La Marina- Birra Elbana brewery, Smania, Elba Bevande for the beverages, Giannoni Ortofrutta, Cantina Allori Guido, Cantina Mazzarri Paolo, La Faccenda, Geco Tessuti and Cenciarelli Rizieri for the help in preparing the race gift package and the pasta party. Another thank you goes to the Capoliveri Police, the Civil Protection of Mare e Monti Lacona and to the Public Assistance of Lacona. The biggest thank you of all goes to all the voluntaries, without them organizing this event couldn’t have been possible. See you next year.

Franco Monchiero (Race Events Trails Chief Advisor) also commented:
“Behind my experience of thousands of organized races, I can tell the hospitality and the organizational skills showed by the ASD Lacona are outstanding. All the volunteers were smiling and willing to help. Just to give you an example, one of them offered to Marco Aurelio Fontana the use of his home to take a shower at the end of the race before Marco had to rush to catch the last ferry to mainland Italy. I would like to thank everyone personally but I do think that the best demonstration of thankfulness will be to return to Lacona next year. Another special thank you goes to the Tallinucci Family for what they have done for the benefit of this race weekend.” 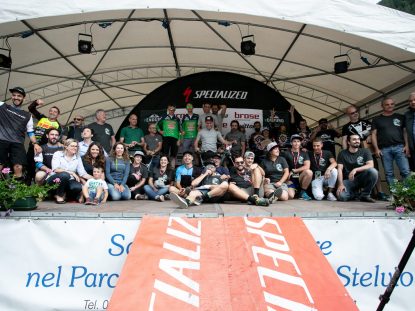