Weather conditions are continuing to characterize the 2018 e-Enduro Series powered by Specialized. While was the rain to dominate the first race in Alassio last month, here in Pietra Ligure were wind gusts to keep company to the 150 riders enrolled in the race during the battle that took place on the competition rad four special stages over the race weekend. To celebrate the event, the Pietra Ligure municipality opened to the race organization the city’s most beautiful square, San Nicolò Square. Here, was assembled the race’s stage and podium structure while the Expo Area was accordingly set-up to accommodate riders, visitors and partner companies. Among the sponsor of the series, the title sponsor Specialized was present with an exposition of bikes and bike products, Brose made available to all the participants its multiple battery recharging station, Vittoria Tire was present with its top quality tires and Fox Suspension products, Mr. Wolf presented its revolutionary no-flat system SmartMousse, Atala showed its complete 2018 e-bike range from mountain biking to commuting, Lapierre and Haibike presented their 2018 models, Braking and Billets showed their brake products and Andreani Group-Olhins offered a complete race service to the riders. The race course was drawn on the trails connecting Finale Ligure to Loano, totaling a 37 kilometers distance and 1500 meters of elevation gain. PS1 and PS2 were located in the Verezzi vicinity with panoramic segments leading to the woods and then opening up again to breathtaking view on the Mediterranean Sea riding on the characteristic soil where the famous Pietra Ligure stone is extracted. PS3 and PS4 were drawn in the Pietra Ligure and Loano vicinity with an initial steep climb that made the difference in the race results. On Saturday, (see recap here) the sun accompanied the 150 riders during recon. The terrain was still wet and muddy from the previous precipitations but shortly dried up because of the wind, becoming fun to ride on and facilitating the aggressive riders. At dawn, party time started with the 4 Rear live performance followed by a DJ set. Beer supplies were provided by the exquisite craft beers made by the local Birrificio of Savona and assured for the entire race weekend. Between women, it was a real fight among Nadine Sapin (Cap Mercantour Vtt) and Mary Wragg-Moncorgé (Collerider BMX) but in the end Sapin won, Wragg-Moncorgé was 2nd and the e-bike rookie Chiara Pastore (Team Locca) third. The Focus Elektra Mobility Team was the winner of the Team category.


Here are all the categories winners: HERE ON ENDU THE FULL RESULTS

We would like to thank the Pietra Ligure Municipality, all the city’s restaurateurs, the volunteers and all the guys at ASD Outdoor Thunder who did an incredible job to organize this race.

2018 E-Enduro powered by Specialized next stop is scheduled for June 16 and 17 in Val di Pejo. See you there. 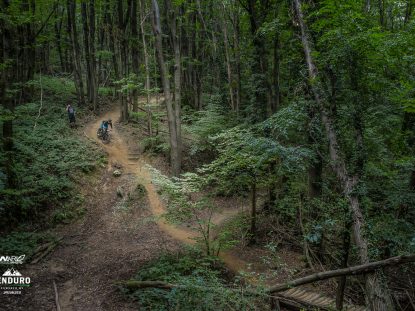