Back in 1987, I remember to have noted in the Lake of Garda region where I used to go windsurfing, a bunch of German guys riding weird bikes with large wheels and enormous gear ratios on the rear wheel.
Surely, those bikes weren’t the first to reach the market but they triggered something in me while giving me a glimpse of understanding of the full potential of those bikes on the fun side. I was hooked and in a two days time I entered a bike shop to get one of those!
As I said, the passion for this awesome way to interpret bike riding was immediate and in a couple of weeks I was fully immersed into mountain biking and everything related to it. By the end of the very same year, I opened a bike shop and because I am a competitive person, I started immediately to go racing.
Approximately at the same time, I heard that in Finale Ligure and precisely in Finalborgo, a guy named Danilo Basso that later on became my friend, was organizing a race dedicated to mountain biking and I decided to go. If I remember well, the race course was five or six kilometers long following the standard of those times and after a couple of laps around the Borgo, the course entered the center of the village and then climb on a single track to reach the arrival in Castel Govone. Unfortunately, Danilo Basso was smarter than me and won the race but I was happy to arrive on the 2nd position but later on, I returned the favor to Danilo! To let you understand the back then state of the art technology for the bikes and the apparel, we were wearing cotton made training sweatshirt and pants plus the street sneakers of that time and the most important technological advance was the introduction of the click gear selector instead of the previous friction levered.
Because good ideas don’t come alone, in the back of my mind the thought of organizing mountain bike races by myself was starting to get shape. Firstly, because I was competing in races all around that weren’t exactly a carbon copy of what I wanted to do over a race weekend and secondly because I wanted to create what I will eventually find on a race course every Sundays.
Consequently, myself and the late Livio Riverditi, probably one of the most esteemed person in the Italian bike biz I ever meet, we started to brainstorm on what would be the most fun formula to organize a mountain bike race. By the mid of 1988, we came up with what was probably the first mountain bike Enduro race of the history to be organized in Bergolo in the High Langhe region. I asked to an experienced man of Motorbike Enduro such as Franco Viberti, chairman of the Moto Club 100 Torri Alba, to give us an help and the race was ready with two special stages, a liaison stage and even a time check point between the two stages.
Unfortunately, after that very first experience in Bergolo nothing followed. Probably we were too much ahead of time or maybe we were too involved in other categories like cross country XC or Downhill to give the new format a go. My mountain biking history went along both professionally and at a competitive level but that very first experience in Bergolo was not forgotten and remained as a cherished dream for some time.
To make it become a reality after a while I called upon some friends like Mauro Rosso, Daniele Vigliero and Enrico Pizzorni. Together we decided to organize two mountain bike Enduro races in Cartosio and in Priero with a combined overall classification. Probably those two were the first mountain bike races with a structured rule book and are still a point of reference for everybody wanting to organize a race.

After that experience, I clearly understood the full potential of mountain biking Enduro and really it was very high. I needed more people to give us a hand and make it grow steadily so I talked with Tutto MTB magazine back then director Marzio Bardi and its Chief Editor Cristiano Guarco and convinced them to create a permanent organizational staff to work on something big. Later on Enrico Guala and Francesco Marzari joined the group.
From that moment on, the Enduro mountain biking as we know it was born. Even if in France at the same time something similar was organized, what we conceived was the first structured format of Enduro mountain biking and became the international standard for the category.
Since 1988 a lot of time passed by but my willingness to create and develop new formats of mountain biking racing is still strong, overcoming the thirty years’ time span from that very first Enduro mountain bike race in Bergolo. Together with friends like Trippa Cristian, Bonandrini Davideand Cip Ghisolfi that still believe in me, the next 2018 season will see the second marvelous edition of the new E-Enduro race series and I would like to thank everyone who took a part on this project and above all, all the riders who will race and have fun in the series 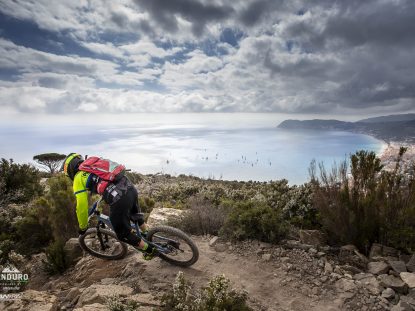 The winners of the first e-Enduro of the season!